One humid afternoon, during breadfruit season in North Ambrym, my language teacher, Isaiah, and I were on the lookout for some ripe breadfruit to roast for lunch. Our path led past his nephew, George’s, house. Isaiah saw some ripe breadfruit in the tree next to where George was sitting on his veranda. Isaiah wanted to get the breadfruit, but said that because George was there, he couldn’t, and we would have to find some others instead. I asked if it was George’s breadfruit tree, and that’s why he didn’t want to take it when George was around. Isaiah said no; rather, the problem was if we went up the tree when George was underneath, then he would have to pay a small fine to George. Over a lunch of roasted and pounded breadfruit called wuwu, Isaiah explained further. It was to do with respect and taboo. 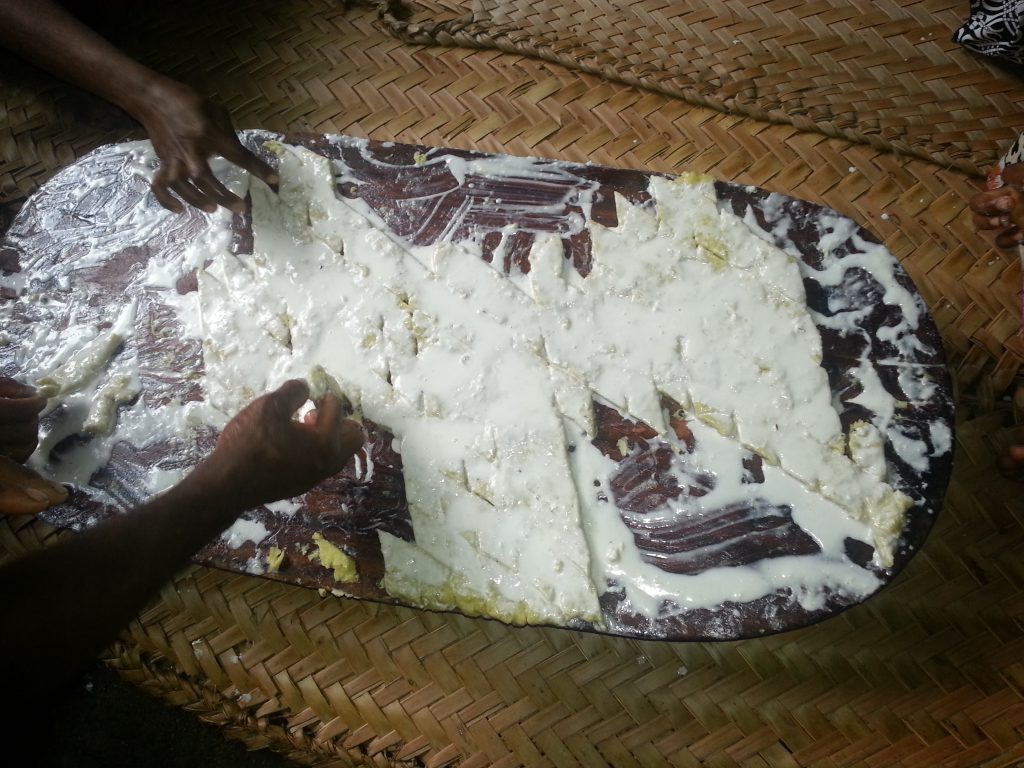 Respect in language takes many forms. There is the tu/vous distinction in French, where tu is the informal form of ‘you (singular)’ and is used with friends and those younger than you, whereas vous ‘you (plural)’ is formal and is used with those elder or senior than you and for people you don’t know. Similar distinctions are found with the German du/Sie. English doesn’t have a grammatical distinction in politeness like this, but uses different sentence structures to express politeness: compare pass me the salt please with could you please pass me the salt, or the even more polite would you be so kind as to pass me the salt please.

Now let’s get back to eating that heavy sticky coconut-cream-slathered wuwu with Isaiah. He told me that you must respect certain members of your extended family by showing physical politeness. Respect is translated as tengnean in the language of North Ambrym. The people who you must respect are your taboo family, described by the verb gorrne. Respect for your taboo family on Ambrym is realised in different ways – through physical restrictions and through language. The family members who command the most respect are your sister’s son or your husband’s brother.

The physical restrictions with a taboo relative include:

But what about restrictions on language? The normal translation of ‘hello’ in North Ambrym would be neng le, which literally means ‘you there’, using neng, the singular form of ‘you’. But you are not allowed to say this to your taboo relatives. Instead, you must say gōmōro le using the dual form of ‘you’, meaning ‘you two there’, even though you are addressing one person. This is similar to French or German mentioned earlier. However, North Ambrym, like many Oceanic languages, not only has singular and dual, but also paucal, meaning ‘a few’, and plural pronouns. Of these possibilities, the dual is used for respect, not the plural as in French or German.

Respect is not confined to pronouns such as ‘you’; people also have to avoid using certain words in front of their taboo relatives. For example, if your sister’s son came, and you invited him to sit down and have some food, you would have to avoid certain verbs, such as taa ‘sit’ or ngene ‘eat’. You would use lingi ‘put’ instead of ‘sit’ and tewene ‘make’ instead of ‘eat’ so the whole sentence would be rephrased as ‘you-two come and put your-dual-self here and make the food’.

You must also avoid certain words concerning body parts, specifically words relating to parts of the head. Normally when talking about body parts in North Ambrym you would use a bound noun – a type of noun which specifies who owns the body part – so the word for ‘tooth’ would be lowo-n ‘his/her tooth’, lowo-m ‘your tooth’, or lowo-ng ‘my tooth’. The end of the noun (-n/-m/-ng in this example) indicates whose tooth it is. But these words are not allowed when talking in front of your taboo relatives. Instead, you could use a free form of the noun, such as leo ‘tooth’.

Another avoidance strategy is to change a verb to a noun using a special nominalising prefix a- that appears on the beginning of the word and turns it into a noun. The verb itself is also reduplicated. For example, the verb ta ‘cut’ can be turned into a noun atata ‘tooth’ (literally ‘thing for cutting’).

Finally, a more idiomatic expression could be used; in this case, tooth is replaced by tō which literally translates as ‘limpet shell (traditionally used as a vegetable grater)’ or teye ‘clam shell/axe’ as a way of avoiding the bound form for ‘tooth’.

Here’s a handy table to help you get your head (or just head!) around avoiding the bound forms.

As time passes, so do traditions, and the older generations mourn the loss of respecting their taboo relatives. They complain that younger generations now joke with their taboo relatives or put their arms around them. This art of speaking is being lost and the physical taboos are being eroded. However, this change is not new and has been going on for several generations. Some of the more extreme forms of respect are almost out of living memory. One of the village elders, Ephraim, recounted a memory of seeing how his grandmother, Mataran, displayed respect when returning from the garden, with her vegetables one day. When she approached her home, she saw that one of her husband’s brothers was there. She came close, then crawled the rest of the way past her husband’s brother with her basket of vegetables over her shoulder, until she was in her doorway before standing up again.

So the next time you are in Vanuatu, take care when climbing trees and make sure you know which of your relatives are nearby!