As spring slowly but surely begins to announce itself with snowdrops, primroses and daffodils, we may ask how much variation there is in the concept of the seasons from one language to another. As Encyclopedia Britannica informs us, “the seasons—winter, spring, summer, and autumn—are commonly regarded in the Northern Hemisphere as beginning respectively on the winter solstice, December 21 or 22; on the vernal equinox, March 20 or 21; on the summer solstice, June 21 or 22; and on the autumnal equinox, September 22 or 23. In the Southern Hemisphere, summer and winter are reversed, as are spring and fall”.

Many languages spoken in Eurasia conform to this division into four seasons. But what other options are there? Leaving aside jokes about places where a single season lasts all year round (Russia: white winter and green winter; Quebec: beginning of winter, end of winter, beginning of next winter; New York: almost summer, summer, still summer, Christmas…), there are languages which really do distinguish between two seasons only: the dry season and the rainy season. Indonesian is like this, having musim hujan ‘rainy season’ and musim kemarau ‘dry season’. In Mandinka (a Mande language spoken in Guinea, northern Guinea-Bissau, Senegal, and the Gambia) the seasons are sàmaa ‘rainy season’ and tìlikandi ‘dry season’. In Wolof (Niger-Congo language spoken in Senegal, The Gambia, Mali and other countries) the seasons are nawɛt ‘rainy season’ and nɔɔr ‘dry season’. Rainy seasons stretch roughly from June to October, while dry seasons take up the rest of the year. Two-season languages are generally spoken close to the equator.

Three-season languages also exist. In Ancient Egypt the year was divided into three seasons: Inundation, when the Nile overflowed the agricultural land; Going Forth, the time of planting when the Nile returned to its bed; and Deficiency, the time of low water and harvest. In some varieties of Turkish there are three seasons only: kış ‘winter’, bahar ‘spring’ and yaz ‘summer’, although other speakers use a four season system: kış ‘winter’, ilkbahar ‘spring’, yaz ‘summer’ and sonbahar ‘autumn’, where bahar can also be used to designate an unspecified intermediate season.

In Polish, besides wiosna ‘spring’, lato ‘summer’, jesień ‘autumn’ and zima ‘winter’ there are the words przedwiośnie (‘before spring’) and przedzimie (‘before winter’). Interestingly, some Polish speakers say that the latter word is now obsolete while the former is used widely. In Russian, there is a word предзимье (predzim’ye) ‘before winter’, but no other words to designate such ‘in-between’ seasons.

But having different number of seasons from the ‘standard’ is not the only possible way for languages to stand out. Have a look at this linguistic puzzle: it was originally composed (in Russian) by Irina Chesnokova for use at the Moscow Linguistics Olympiad, and it recently appeared in a collection of the best Olympiad puzzles (Традиционная Олимпиада по лингвистике. 49 лучших задач. [The Traditional Linguistics Olympiad. 49 problems], Moscow, 2020).

It is all about how the Manx language refers to various kinds of time period. Problem. Manx is a language belonging to the Celtic branch of Indo-European, spoken by about 1800 people on the Isle of Man. Consider these phrases in Manx and their unordered English translations:

As is rightly emphasized on the website of the  International Linguistics Olympiad – which, incidentally, is going to be held on the Isle of Man this year, “no prior knowledge of linguistics or languages is required: even the hardest problems require only your logical ability, patient work, and willingness to think around corners”. For those who want to try and solve the problem for themselves, I will give the solution below, underneath a picture of a hellebore, the first flower to open in our garden at the end of winter: 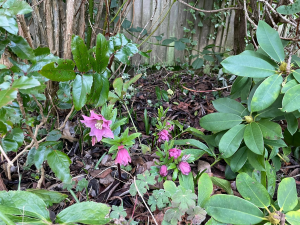 Solution to the problem.

In the middle column I give the literal translations, and in the right column are the actual equivalents of the names of the months:

As we can see, the crucial point in solving of the problem is to realise that the seasons in Manx do not match up with the seasons in English: in Manx, January counts as the end of winter, not the middle, September is the middle of autumn, not the beginning, and so on.