To celebrate the end of UNESCOs International Year of Indigenous Languages we thought we would take a look at some of the Indigenous languages that we are researching and present some of our favourite words. Now these words just aren’t any old words, they are words that can’t be directly translated into English using a single word and must be translated using a rather long-winded explanation. Each of these words offer unique cultural insights into the speakers of these languages. We will be skipping across the continents to all the exciting places where we conduct our research…

South Sudan and Ethiopia
Our first stop on our world tour of untranslatable words is to South Sudan and Ethiopia where two closely related West Nilotic languages are spoken – Nuer and Reel. The Nuer tribe is one of the largest ethnic groups in South Sudan with around a million or so speakers. Whereas Reel is spoken by around 50,000 speakers from the Atwot tribe.

The Nuer and Atwot peoples are traditionally pastoralists. Cattle play an important role in every aspect of the traditional life. The Nuer and Atwot also rely to some extent on horticulture for their living. They lead a semi-nomadic life style determined by the availability of pasture grounds.

1. tɛ́ɛt ‘to claim something back that was previously given out for good’

The Nuer verb tɛ́ɛt roughly translates as ‘to claim something back that was previously given out for good’. It is used in the situations when an item has been given to someone for good but then later the item is being recalled back. For example, it is customary to give cattle to the parents of a bride. If, for some reason, the couple wants to separate, the cattle have to be returned before the woman can go back to her parents.

2. wé̤eer ‘search by parting something’

The next word comes from Nuer’s neighbours – The Reel speaking Atwot tribe. The verb wé̤eer translates as ‘search by parting something’. This word is used when the searching involves moving apart items that sit together densely as, for example, maize or bushes.

Kazakhstan
Moving on to Central Asia and to the largest landlocked country in the world. Kazakh is the national language of Kazakhstan, though also spoken in Xinjiang province of China and in parts of Mongolia.

3. Tusau Keser ‘the cutting of the tether’

One of the first Kazakh rituals that a child goes through is Tusau Keser (Тұсау кесер) – which means ’the cutting of the tether’. When a young Kazakh starts to walk, their parents organize a party and the child’s legs are tied together with colourful threads. This colourful tether is then cut to welcome the child to the next stage of their life.

It is believed that if the Tusau Keser ceremony is not performed, the child will be unlucky or have problems walking in their adulthood. In some parts of Kazakhstan they tie the legs with the fatty intestines of a horse, which – in case you were wondering – represents wealth!

The beginnings of this ceremony lie in the pastoral culture of the Kazakhs. The legs of young horses and sheep are tethered in order to tame them and only cut when they are old enough not to wonder away from the rest of the animals. Therefore, the day an animal’s tusau ‘tether’ is cut is meant to be the beginning of a new life stage.

4. Süyinshi ’be happy’
Süyinshi (сүйінші) literally means ’be happy’, but this word is used only in one specific situation. If something really great has happened to someone and they want to share the good news with their friends, they have to shout süyinshi before telling everyone the news. What’s great about this word is that when someone shouts süyinshi, the friends get to ask for any kind of present they want from the person shouting süyinshi. Normally this mini ritual starts with friends asking for houses, cars or livestock, and then ends up in the pub where the vodka is bought for the friends instead.

Dagestan
On the other side of the Caspian Sea in the Caucuses lies Dagestan where one of the SMG’s favourite languages lies – Archi. With only around 1300 speakers, Archi is considered an endangered language.

5. biční ‘lower corner of a sack or bag’

Not only are the Archi people famous for their lamb due to proximity of lush alpine pastures, but they also make rather beautiful bags called tus:əra. The lower corners of these handmade bags have a special term – biční. The corners of larger sacks, used for carrying grain, were the best place to hold on to upend and pour out the contents. The corners of the smaller bags are also embellished with rather beautiful tassles. What’s even more interesting about these corners is that one corner is called biční, but two corners are called boʒdo. Archi uses a different word form (known as a suppletive form) for the plural. This goes against the claim that suppletives are only used for frequently occurring words, with the lower corner of a bag probably not cropping up in many everyday conversations.

These beautiful bags were originally used in everyday life, but nowadays they are reserved for traditional ceremonies. At wakes these bags are filled with traditional foods such as sweetmeats.

Vanuatu
Skipping across to the South Pacific and to most linguistically dense place in the world – the archipelago of Vanuatu. The Oceanic language of North Ambrym, with around 5000 speakers, not only has interesting possessive classifiers but also a whole host of culturally specific and directly untranslatable words. The Ni-Vanuatu (people from Vanuatu) are self-sufficient farmers with plenty of land to grow yams, manioc, bananas and raise pigs.

6. fafar ‘to wipe your bottom on a tree trunk’

By far this is my favourite word from North Ambrym. if there are no suitable leaves around after doing your business in the bush it makes sense to use a tree trunk. Of course, not every tree trunk can be used for this sort of thing. Please avoid large and knobbly trunks – slender smooth trunks are advisable!

7. yangyangne ‘to shoot an arrow to follow its course in order to find a lost arrow’

Not paying attention when you were off shooting wild birds in the jungle with your arrows? Well shoot another one with the same power and in the same direction and make sure you pay attention this time and you may find your lost arrow. Bad golfers could probably use this trick to find their lost balls in the rough!

Siberia
Now off to eastern Siberia and to the Tungisic language of Negidal which sadly only has a handful of speakers left.

8. un’i ‘be upset, get ill because someone ate in your presence and did not offer to share the food’

You should stay away from scrooges this Christmas as it would be a shame if someone ate a mouth-watering turkey roast with all the trimmings in front of you and did not offer you anyǃ Negidal speakers can also use this verb in other situations, not just for when people eat food in front of you. Un’I can be used for any unfulfilled desire which makes you ill, such as wanting to smoke a cigarette when there are none left or from wanting to see a close friend who is far away. The depression that you feel can be so great sometimes that it is said that you can die from it.

Lapland
Seeing as Christmas is almost upon us what better place to end our untranslatable journey than in Lapland and the language of Skolt Saami. Skolt Saami is spoken in the far northeast of Finland with only around 300 speakers. Traditionally the Skolt Saami are reindeer herders, which is still important to this day. The Skolt Saami have many specific terms for their reindeer.

The word sa’mja’d isn’t made up of the words for black and reindeer in the language and is a specific word that describes black reindeer. If you want to talk about reindeer in general then you would use puäʒʒ, and the word for black is čaʹppes. 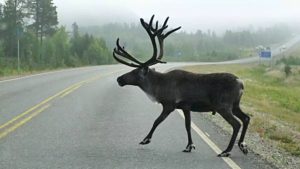 Only the strong survive in Lapland and there is even a special term for those strong young reindeer who make it through their first year.

With many words for the different types of reindeer we were hoping to find one that meant ‘reindeer with a red nose’, but sadly couldn’t find oneǃ

Merry Christmas from all of us at MORPHǃ

With thanks to Marina Chumakina, Tatiana Reed, Dávid Györfi, Tim Feist and Greville Corbett for their contributions.