Recently, a friend of mine received an email saying that because of their hard work in difficult circumstances this year, he and his colleagues would all be “gifted” a few extra days off over Christmas. And the other day I saw someone else wondering on Facebook: ‘when did the word “given” cease to exist, and why is everything “gifted” now?’ So with the festive season fast approaching, it seems like a good time to ask: is there really something funny going on with the word gift?

Once you gift it a bit of thought, I don’t think I am gifting anything away by pointing out that the verb to give is still very much with us. But the rise of a rival verb to gift, in some contexts where you’d expect to give, has been receiving attention for a while now: in recent years it has been discussed on National Public Radio in the US (The Season of Gifting) and in The Atlantic magazine (‘Gift’ is Not a Verb). Whether or not it bothers you personally, you may well have noticed the trend. The existence of gift as a noun is just a mundane fact of life, but apparently the corresponding verb gets people talking.

Now, nobody would be surprised to learn that English changes over time, or even that it has pairs of words that mean more or less the same thing… how much difference is there between liberty and freedom, or between little and small? And in fact, synonyms have an important role to play in language change. If we look back and notice that one expression has been replaced by another – a historical change in the vocabulary, as when the Shakespearian anon gave way to at once – then there must have been an intervening period when they were both around with pretty much the same meaning, and people had a choice of which one to use.

Does that mean that we do now find ourselves in the very early stages of a long historical process which will eventually result in to gift replacing to give altogether? If that’s the case, in a few generations’ time people will be saying things like ‘Never gift up!’ or ‘Could you gift me a hand?’.

But whatever happens in the future, that clearly isn’t the situation now. So if English often provides multiple ways of saying the same thing, why have people taken the coexistence of to give and to gift as something to get worked up about – and can linguistics shed any light on what is going on here?

One thing that makes this specific pairing stand out is that the two words are just so similar. Gift is obviously connected with give in the first place: that makes it easy to wonder why anyone would bother to avoid the obvious word, only to pick an almost identical one. Another factor (as the title of The Atlantic article makes clear) is the idea that gift is really a noun, and so people shouldn’t go around using it as a verb.

But if we take a broader view, it turns out that what is happening with to gift is not out of the ordinary. Instead, it fits neatly with some things that linguists have already noticed about English and about language change more generally. For one thing, English is very good at ‘using nouns as verbs’ – which is why we can hammer (verb) with a hammer (noun), fish (verb) for fish (noun), and so on. So a verb gift, meaning ‘give as a gift’, goes well with what the language already does. What often happens is that when a new verb of this kind starts to take off, not all speakers are happy about it, but after a while it gains acceptance. For example, the twentieth century saw complaints about verbs-from-nouns such as to host, to access or to showcase, but they grate less on people nowadays.

Ultimately, the ability to create words like this is just an ‘accidental’ fact about English, which also has various other ways of making verbs from nouns – for example, turning X into ‘X-ify’ (person-ify, object-ify) or ‘be-X’ (be-friend, be-witch). The bigger question may be: as we already have the verb give, why would anyone bother to make a verb gift in the first place, and why would it ever catch on? It might seem that by definition, a gift is something you give, so inventing a term meaning ‘give as a gift’ is pointless.

But that is not how things really are. Gifts are given, but that doesn’t mean that everything that can be given counts as a gift: a traffic warden might give you a parking ticket and in return you might give him a piece of your mind, but the noun gift doesn’t cover either of those things. Among other restrictions on its use, it is generally associated with positive feelings: if you give something as a gift, it is usually something tangible that you expect to be warmly received, and that carries over into the verb to gift itself. 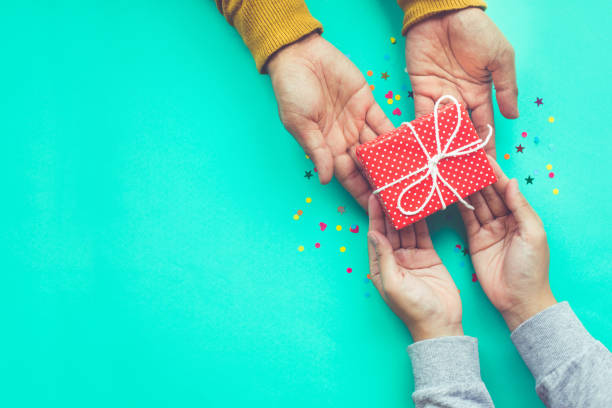 This subtle difference between to give and to gift explains why for the moment it is impossible to gift someone a sidelong glance, or lots of extra work to do. But apparently it is becoming possible to gift an employee some time off, even though that is not a physical present that can be handed over and unwrapped. Evidently, the writer just felt like using a verb that sounded a bit more interesting and positive than to give, and the ‘warmly received’ part of the meaning was enough to outweigh the lack of any tangible object involved.

This is an example of something that happens all the time in language change. Naturally, while a word is still restricted in its use, it is more noticeable and interesting than a word you hear regularly. As a result, sometimes people decide to go for the less common word even where it doesn’t quite belong, to achieve some kind of extra effect… but over time, this process makes the word sound less and less special, until it eventually becomes the new normal. We don’t even need to look far to find this happening precisely to the word ‘gift’ in other languages: French donner ‘give’ is based on don ‘gift’, and it has totally wiped out the normal verb for give that ‘should’ have been inherited from Latin.

So if speakers and writers of English continue to chip away at the restrictions on gift as a verb, maybe one day it really will replace give altogether. Of course, that idea sounds totally outlandish at the moment – but then, I’m sure the ancient Romans would have thought much the same thing. You never know what will happen next: language change truly is the gift that keeps on giving!