My right arm has been bothering me lately. The nerve has become inflamed by a pinching at the neck, creating a far from desirable situation. When trying to explain the condition to a friend, I compared it to sciatica, but of the arm. I am not here to bore you with my ills, however, but to tell you a story precisely about that word, sciatica. You may wonder what is so special about it. It is true that it has a weird spelling with sc, just like science, and that it sounds a little bit like a fancy word, having come directly from Latin and retaining that funny vowel a at the end which not many words in English have. But more than that, the word sciatica gives us a crucial clue about changes which have transformed the way the English language sounds.

English is a funny language. Of all the European languages, it has changed the most in the last thousand years, and this is particularly apparent in its vowels. In the early Middle Ages, starting perhaps sometime in the mid-14th century, the lower classes in England started changing the way they pronounced the long vowels they had inherited from earlier generations. Some have even claimed that the upper class at the time, whose ability to use French had started to peter out in the 15th century, felt that one way they could make themselves stand out from the middle classes was by changing their way of speaking a bit. To do this, they took up the ‘bad’ habits of the lower classes and started pronouncing things the way the lower classes would. But in adopting the pronunciation of the lower classes, they also made it sound ‘refined’ to the ears of the middle classes, so that the middle classes also started to adopt the new pronunciation… and so the mess started. 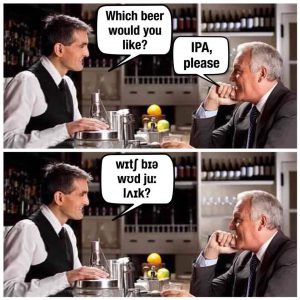 Pairs of words like file and feel, or wide and weed, have identical consonants, differing purely in their vowels. They are also spelled differently: file and wide are written with <i…e>, while feel and weed are written with <ee>. The tricky part comes when you want to tell another person in writing how these words are pronounced. To do that one normally makes a comparison with other familiar words – for example, you could tell them ‘feel rhymes with meal’ –  but what do you do if the other person doesn’t speak English? In order to solve this problem, linguists in the late 19th century invented a special alphabet called the ‘International Phonetic Alphabet’ or ‘IPA’, in which each character corresponds to a single sound, and every possible sound is represented by a unique character. The idea was that this could function as a universal spelling system that anyone could use to record and communicate the sounds of different languages without any ambiguity or confusion. For file and wide, the Oxford English Dictionary website now gives two transcriptions in IPA, one in a standardised British and the other in standardised American: Brit. /fʌɪl/ & /wʌɪd/ (US /faɪl/ & /waɪd/). For feel and weed, we have Brit. /fiːl/ & /wiːd/ (US /fil/ & /wid/). So, in spelling, <i…e> represents /ʌɪ/ (or /aɪ/) and <ee> represents /iː/ (or /i/). But why is this so?

The answer lies in the spelling itself, which is a tricky thing, as we all know, and took many centuries to be fixed the way it is now. English spelling is a good example of a writing system where a given letter does not always correspond to one particular sound. There is no rule from which you can work out that wifi is pronounced as /wʌɪfʌɪ/ (or /waɪfaɪ/) – you know it simply because you have heard it pronounced and seen it written <wifi>. This is not obvious to other people whose native language is not English: as a native Spanish speaker, when I first saw the word wifi written somewhere, the first pronunciation that came to my mind was /wifi/ (like ‘weefee’) but not /wʌɪfʌɪ/.

Contemporary English spelling very much reflects the way people pronounced things at the end of the Middle Ages. So words like file and wide were pronounced with the vowel represented in IPA as <iː>, which today can be heard in words like feel and weed. At that time, the letter <i> (along with its variant <y>) represented the sound /iː/. The words feel and weed, on the other hand, were pronounced with the vowel represented in IPA by <eː>, sounding something like the words fell and wed, but a little longer. Most of the words that in the English of the Middle Ages were pronounced with the long vowels /iː/ and /eː/ are now pronounced with the diphthong /ʌɪ/ (or /aɪ/) and the vowel /iː/ (or /i/), respectively. These changes were part of a massive overhaul of the English vowel system known as the ‘Great Vowel Shift’, so-called because it affected all long vowels – of which there were quite a few – and it took centuries to complete. Some even claim that it’s still taking place. But if we fail to update our spelling as pronunciation changes, how can we tell when this shift happened? That is when the word sciatica comes in.

The word sciatica is now pronounced as /sʌɪˈatᵻkə/ (US /saɪˈædəkə/). Because of the spelling <i> in ‘sci…’, we know that the word would have been pronounced something like /siːˈatika/ (‘see-atica’) when it was introduced in English from Latin by doctors, who at that time still used Latin as the language of exchange in their science. But sciatica is not a very common English word, and does not even sound naturally English. So unless you are a doctor or a very educated person, there is a high chance of getting the spelling wrong. In a letter to her husband John in 1441, Margaret Paston wrote the following about a neighbour: “Elysabet Peverel hath leye seke xv or xvj wekys of þe seyetyka” – “Elisabeth Peverel has lain sick 15 or 16 weeks of the sciatica”. While my sympathies go to Elisabeth Peverel as I write this, the interesting thing here is the way the word sciatica is written by Margaret Paston, as seyetyka. Here the spelling with <ey> tells us a nice story: that the diphthongisation of Medieval /iː/ into something like /eɪ/ had already happened in 1441. Because of that word we know that Margaret Paston, her husband, and poor Elysabet Peverel not only said /seɪˈatikə/ but also /feɪl/, /weɪd/ and /teɪm/, rather than /fi:l/, /wi:d/ and /ti:m/, even if they still wrote them the old way with an <i> as file, wide and time, just as we do nowadays. From this we can also deduce by the laws of sound change that the other long vowels had also started to change their pronunciation, so that these people were already pronouncing feel and weed in the modern way, despite spelling them the old way with an <e>.

This mouthful of a word sciatica is thus the first word in the entire history of English to tell us about the Great Vowel Shift. It is true that its story doesn’t ease the pain that its meaning evokes, but at least it makes it easier to deal with it by entertaining the mind…